When the whistle blew my reaction was to hit the gas, but with 60+ girls on the start line, and me being many rows back, all you can do is wait. It takes a few seconds before you can move, meanwhile the front row is sprinting away.

Right at the start, a girl crashed so I had to slam on my brakes, then try to get around her. I don’t think I lost too many positions right there because everyone needed to slow down but I looked up the hill and there was a gap to the lead girls that were in front of the crash. 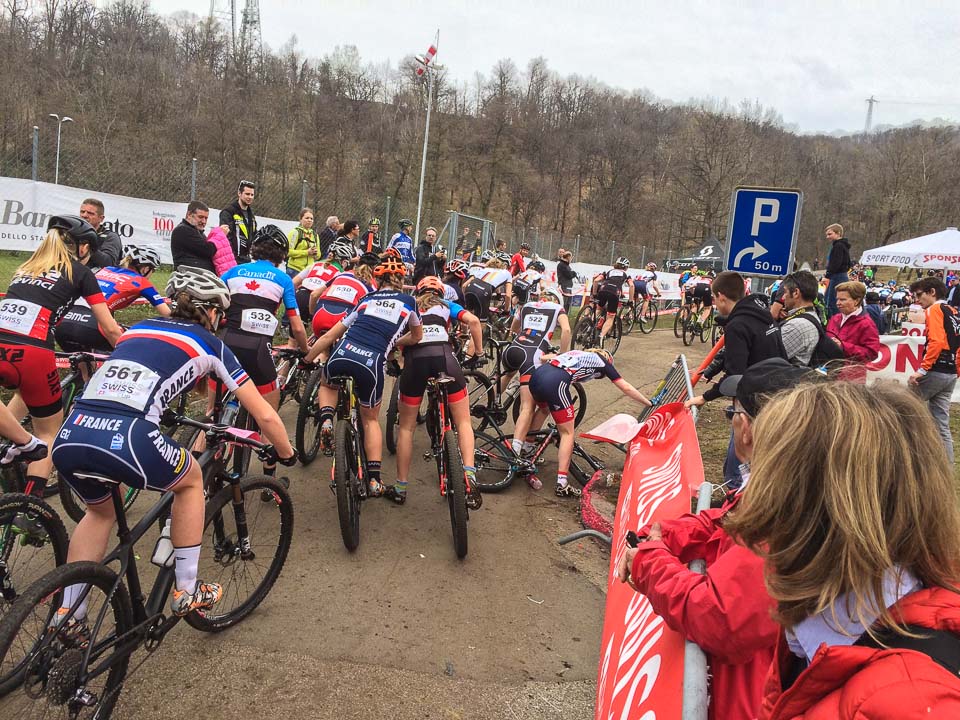 I closed the gap a little on the climb up to the entrance of the first single track, but then right away we were into the first technical single-track section. Unfortunately because everyone was trying to funnel into a small opening, everyone was forced to get off and walk. I was able to make up a few positions in this section just from running and getting back on quickly.

On almost all of the features and even moderately technical sections there were girls walking and getting in the way. It was the worst at the big jump. 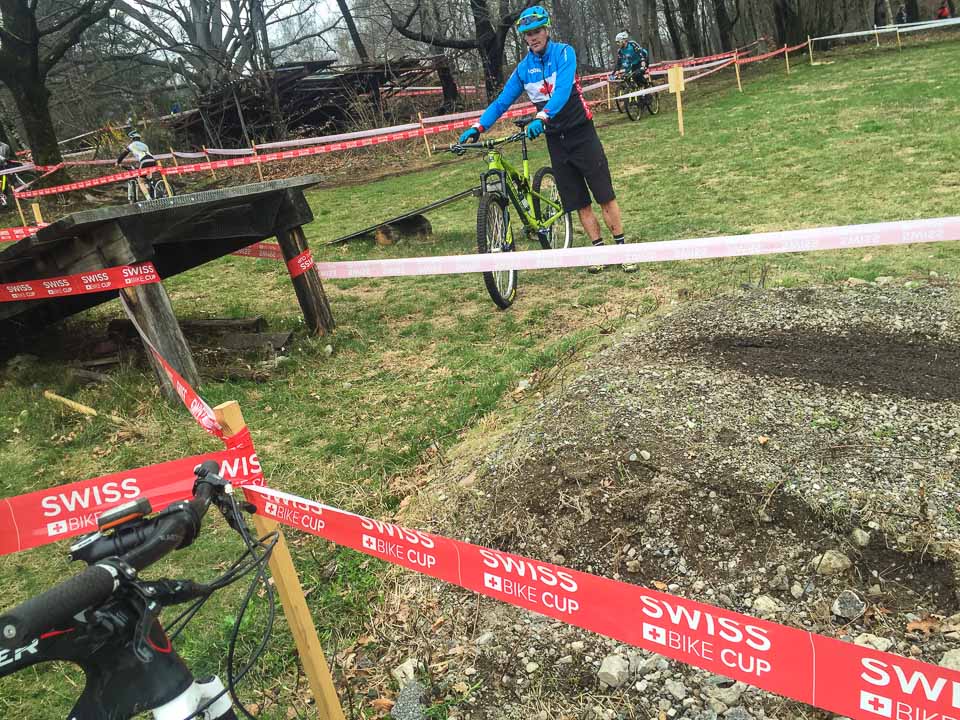 I came into the jump on the wheel of a few other racers, and with lots of speed so that I could clear the gap. Then things got ridiculous. The girl leading us into the jump stopped right on the lip. She got scared.

We all had to stop and it was too late to turn back to ride the alternative “B” line (slower & safer, but longer). There was no way around and there were 4 or 5 girls ahead of me. We all had to take turns lowering our bikes, then jumping down. It was a tall jump, so it took time for each person. I lost quite a few spots since the next group of girls coming up behind us realised we were stuck and passed easily down the “B” line.

The rest of my first lap I just worked on making up for those lost positions by passing as many girls as I could.

During my second lap I was continuing to make good progress. Getting first into technical sections helped, then I could ride them and control the section. Many of the girls had lots power but not the greatest technical skills, so i could often get a gap on them by riding challenging sections they could not.

My second lap went well and I felt good. I had to really hold back and pace myself as I was having so much fun and I just wanted to GO. 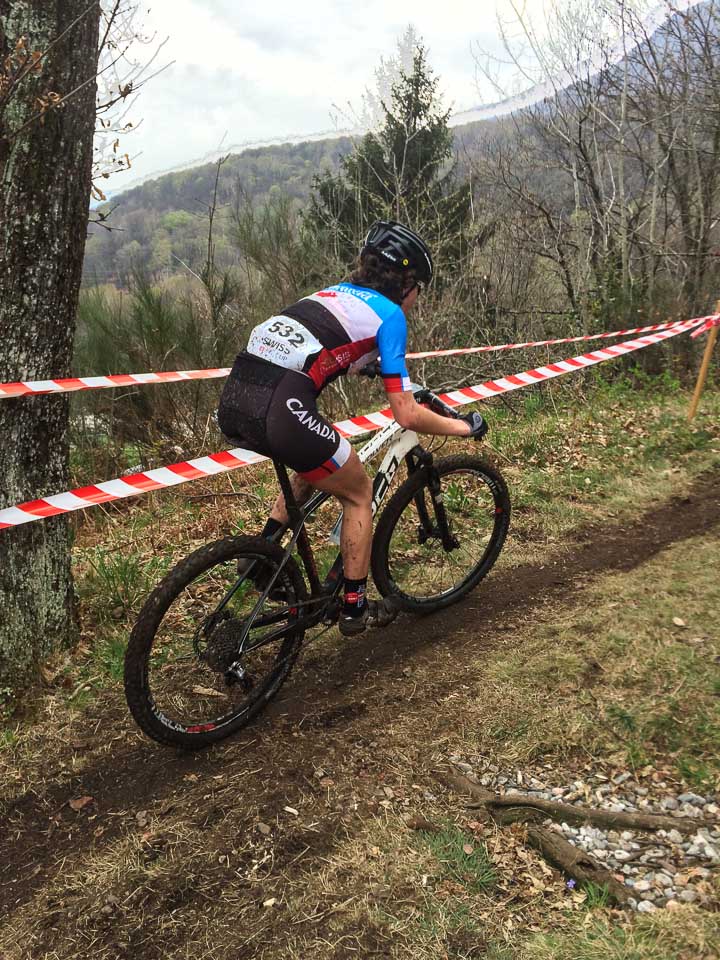 By my third lap I had caught another group of girls, but again they were not skilled in the technical sections. It was tough because I would end up stuck on their wheels leading into technical sections and they would have difficulty while all I wanted to do was pass. I was really trying but they were doing almost anything to not let me pass.

Some girls would take the “B” line down a section while I took the “A” line, so that opened up some passing opportunities and I didn’t need to deal with their elbows.

In my third lap Jolanda Neff passed me (Elite women did 5 laps, Juniors 4) just before a technical descent.

Staying in front of the race leader is a motocross bike that rides the trail so that lapped riders know to move. I could hear the bike coming for awhile so I just made sure I was aware of how far back she was. As soon as she got close I pulled right over on the course to let her go by (and I cheered for her). I then jumped right on her wheel and followed her down the descent and up the next climb. Talk about motivation!!

It was maybe 7 seconds, but as a big fan I was so happy to just see her. As we came to the top of the climb you had to dismount and run up an extremely slippery bridge, she’s so fast, it didn’t slow her down at all.

Later again on my third lap I had some problems with another Junior girl riding right up to the edge of the big jump and stopping. I was so excited to do the jump again because it was awesome, but again we all had to stop and one by one lower our bikes, then ourselves. This time an elite woman was caught behind the stopper, so that made the situation much worse.

On my fourth lap I was starting to feel the fatigue. My arms were so sore because of all the climbing and it was hard on your arms down those technical descents.

I just tried to open it up a bit on the first big climb through the start/finish, then recover down the descents and just finish as hard as I could. Every second and position counts.

Up another climb this girl I was chasing stopped and ran, blocking the trail. I had to suppress my Canadian instinct, not apologise, and be a little more aggressive. I was able to make it past her and into the descent first, then opened a substantial gap.

The rest was just go go go. At the finish I was so happy to have just completed my first European race. It was really fun and I had an amazing experience. 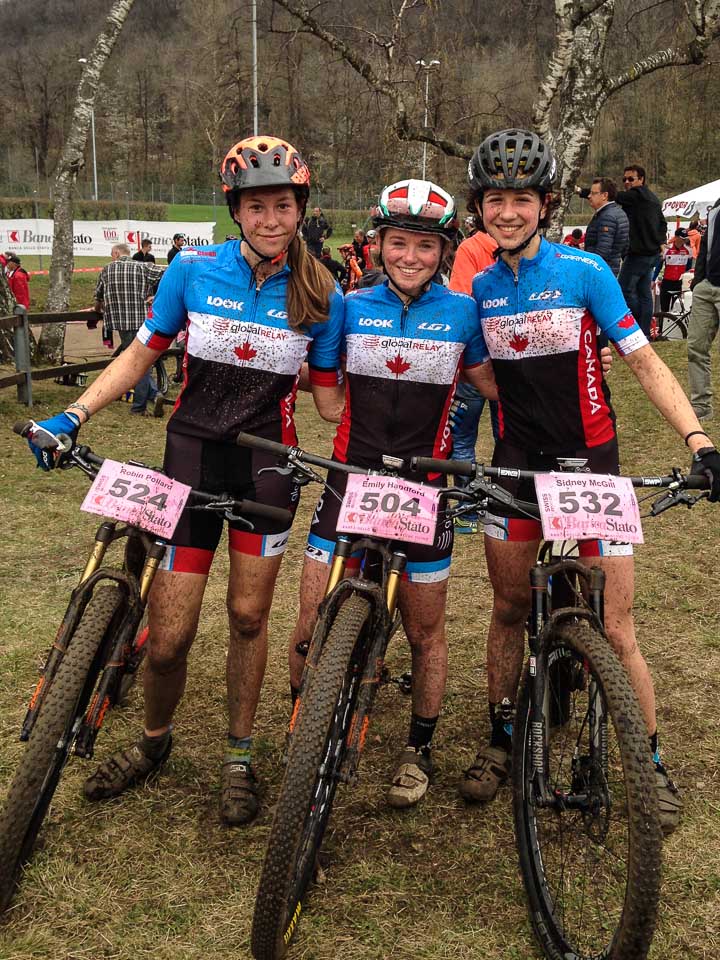 Looking forward to Germany next weekend.

P.s. It was great to chat with Evie Richards who finished 3rd in the Elite Women and also won the U23 World Cyclocross Championships a few months ago. (I’m such a fan girl) 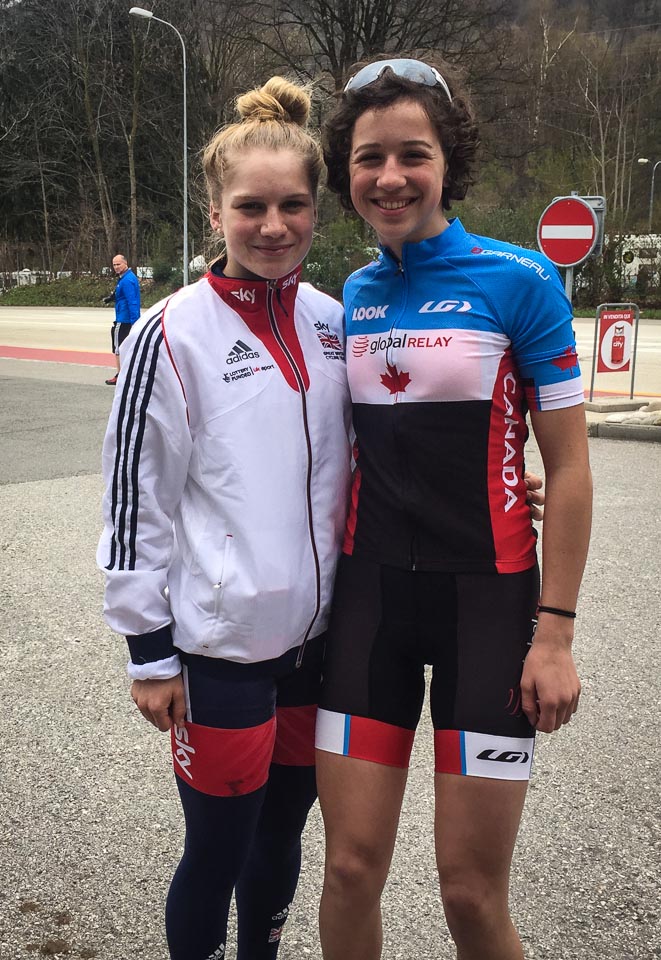