The start was rough due to the girls in front of me slamming on their breaks all of a sudden, and I ended up being in last place about 3 seconds after the start.

@canmtbcycling Awesome performances and a clear progression from all the riders at this morning’s German National HC race. Despite a poor lottery start position, @seanfincham98 finished with a 20th place, overtaking more than 80 riders, @victo26 with a very solid 32th place. Girls rocked the course with @emhandford and @sidneymcgill getting their first top 10 in International racing, @robin.pollard getting top 15. Good job to all athletes! #cyclingcanada #progression #juniordevelopment #hoponcanada #juniornationalteam #cantbeatinternationalracing #wishthereweremore #internationalprojects

Luckily up the climb, I was able to take advantage over the other racers by sprinting up the far side of the course. I passed 6 or more racers then continued to pass more around the final corner into the single track. I was worried that off the start there would be a bad bottle neck in this spot and that we riders near the back would end up walking. Luckily with making those earlier passes, I could ride right up and into the first technical section.

I was fighting for every position, not giving anybody an inch. I learned after last weekend that even the tiniest hesitation can cost you. My first lap I just fought for everything, any position or second, and was in good standing by the time the lap was done.

The second lap I was starting to feel the heat, I was dumping as much water on myself as I could. I was just focused on chasing the girl ahead of me and being smooth through my lines.

Again on the third lap, I recovered where I could while staying loose and be smooth to try and make up as much ground as I could.

At the beginning of the fourth lap, I was pacing myself nicely, just to make sure I had something for the finish. The second half of the lap was just riding hard and trying to close gaps ahead of me or open up ones from behind. The final single track section before the road sprint was through a pump track, my arms again were feeling pretty cooked but I gave it my all, as I wanted to make up any time I could.

Sprinted through the finish and I was done! Everyone was cheering and it so amazing! People seemed really excited and happy to see Team Canada riders out so they would cheer hard no matter our standing or if they knew who we were. Some people were really intense but it was so great because it gave me the little boost I needed to get up the climb or make an attack.

Finished 8th. My first Top 10 at an International MTB race.

Thank you to Bridgett and Dave (former Edmontonians) who now live nearby and drove to Bad Säckingen to cheer on Team Canada!! 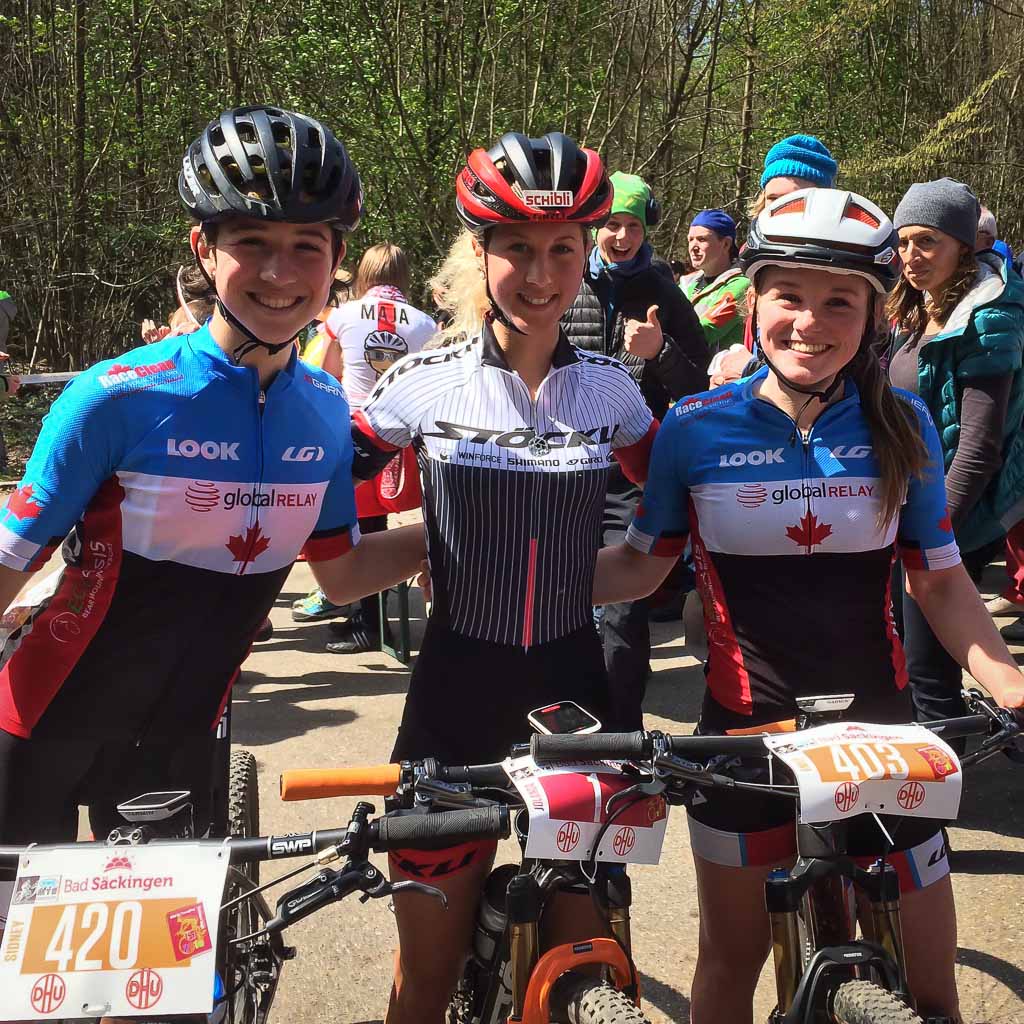 After my race, Emily Handford and I waited for a picture with Jolanda Neff (#1 World Elite Women). We were so star stuck! It was amazing to get some pictures and have a quick chat!!! Soon after we all piled back in the van and off to Zurich where we will be catching our flights back home first thing Monday morning.

I definitely do not want to leave Europe, there is so much great riding and I love the stiff competition. But sadly I can’t pretend school doesn’t exist, forever!